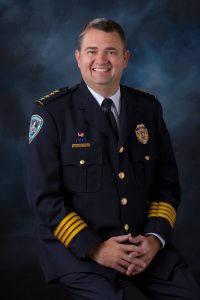 JOSEPH P. LOPINTO, III is the Sheriff of Jefferson Parish. He has served the Jefferson Parish Sheriff Office as Chief Criminal Deputy and Commander of Field Operations, Legal Liaison, Narcotics Detective, and Deputy. He joined the JPSO in 1997 as a recruit.

Sheriff Lopinto was elected to the Louisiana House of Representatives where he served nine years. During his tenure he served as Chairman of the House Committee on the Administration of Criminal Justice.

He has been instrumental in educating his fellow law enforcement community serving as both a teacher and mentor in the Jefferson Parish Academy as well as with other Sheriffs and law schools throughout the state.

He is a lifelong resident of Jefferson Parish, Joseph and his wife, Lauren, have a set of twins, Joey and Lily.